Akka actors fits nicely with DDD (Domain Driven Design) to design an application. E.g. It’s quite natural to model entities as individual actors who can be persisted, …

Anti-corruption layers (aka translation layers or adapter layers) are used to enforce this principle. Basically their role is to translate the core domain objects into/from another domain that is used for communication or persistence.

In this blog post we’re going to try to follow the DDD principles to build a small (contrived) application using Akka and try to figure out the best way to build efficient anticorruption layers.

We’re going to build a tiny application with 2 services. 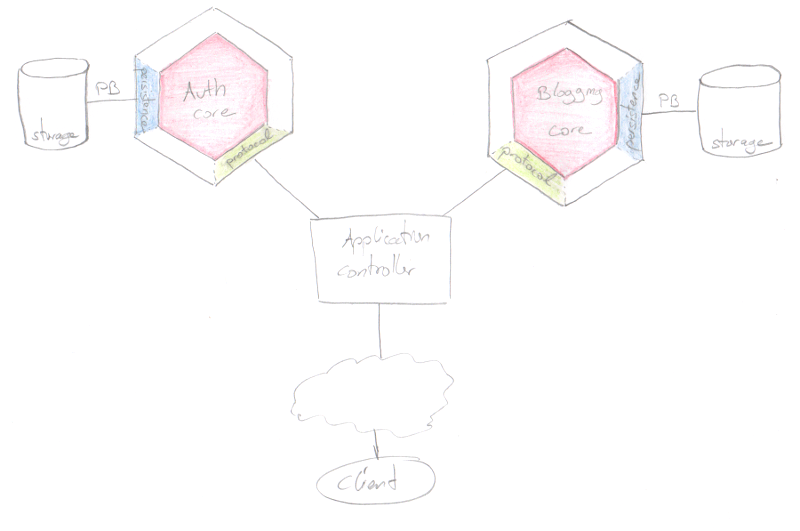 Then we have the App which simulates a scenario involving these 2 services.

Each of these services is persistent in order to recover from failure and doesn’t leak its domain model into the persistence layer or with the outside world (e.g. the App client).

Both services follow the same implementation model and relies on 3 different domains:

Given that this is just a proof of concept focusing on the anti-corruption layers, there is little to say about the core services.

They are implemented as Akka actors and are the only place where the core model is used to implement the business logic.

What they do is not really important but it’s worth noting that they call persist with domain objects. They also receive domain objects directly inside the receiveCommand method. Finally sending messages to the outside world requires a call to translate to convert domain objects into protocol objects.

The persistence layer is implemented in 2 steps:

The translation between the domain model and the persistence model is done using fluent. It makes the translation super-simple as we just have to specify which class gets transformed into which one.

The serialisation into protobuf is assured by pbdirect. It allows to transform the persistent model case classes directly into protobuf without having to declare the same data structure into a .proto file.

As you can see PBAuthSerializer doesn’t extend the Akka Serializer directly. Instead it inherits from PBAkkaSerializer which checks if the implementation has a serialisation/deserialization defined for a given class.

Note that if you use several serializers (typically one per service) you need to make sure their ids are unique otherwise you might be asked to deserialise unexpected messages.

The implementation relies on fluent as well and look similar to the persistent’s layer EventAdapter.

However this translation doesn’t fit into any of the Akka components.

One possible solution might be to implement a proxy actor in front of the business domain actor. The proxy actor would be in charge of translating messages into the appropriate model and forward it to the intended actor.

Here I tried another approach: define a wrapper using the aroundReceive method to intercept the message and translate them before they are delivered to the actor’s receive method.

This is exactly what the AdapterActor does.

It works just fine for the incoming messages. On the other hand sending messages is performed directly by the ActorRef representing the destination actor. As it’s not possible to override the ! (tell) method on the ActorRef, there is no easy way to automate the translation for outgoing messages.

It’s possible to define another operator for “translate and tell”, but I found that actorRef ! translate(message) is clear and explicit enough (compared to another “obscure” operator). 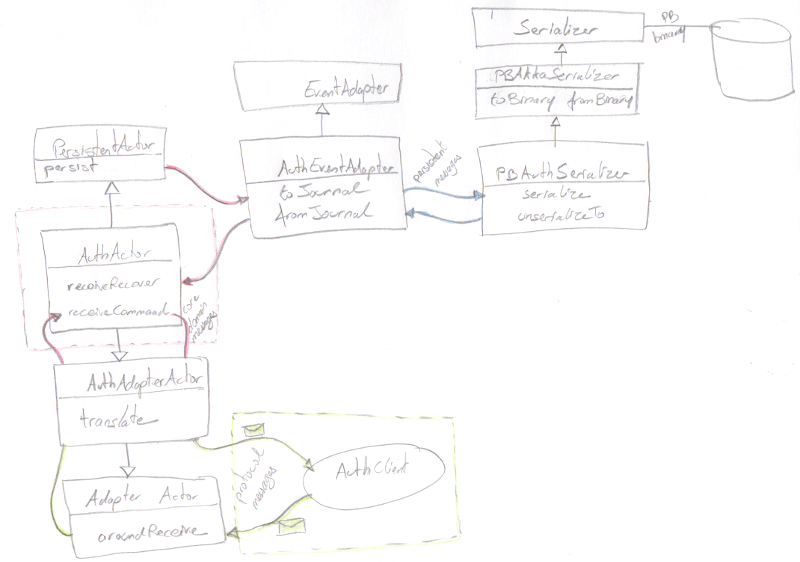 The core business model is contained inside the core actor and doesn’t leak into the persistence layer or to the outside world.

The translation mechanic is hidden from the core and lies in specific classes (or trait) which makes the code well organised and easy to navigate. PBDirect and fluent libraries makes it ease to weave things together.

Implicit resolution occurs at compile time which is good because it minimises the runtime penalty but it doesn’t play well with Akka where the configuration is resolved at compile time (by reading the akka.conf file). Moreover the Akka API are defined as Any => Any or Any => Unit methods which doesn’t play well with implicit resolution which relies on type parameters.

I might be worth to have a look at Akka-typed to see how the “translation” behaviour can be implemented “around” another behaviour.

As usual you can find the code on github and let me know what you think or how do you implement your anti-corruption layers in Akka using the comments below.