Last time we talk about what is a Markov chain. However there is one big limitation:

A Markov chain implies that we can directly observe the state of the process. (e.g the number of people in the queue).

Many times we can only access an indirect representation or noisy measure of the state of the system. (e.g. we know the noisy GPS coordinates of a robot but we want to know it’s real position).

In this post we’re going to focus on the second point and see how to deal with HMMs. In fact HMM can be useful every time that we don’t have direct access to the system state. Let’s take some motivational examples first before we dig into the maths.

Whatever we choose it always goes done to the same diagram that is know as a Trellis diagram. In fact understanding these diagrams is quite important as most of the properties we’re going to see can be inferred from it.

A Hidden Markov Model (HMM) is defined by

If this is clear let’s start with the joint distribution:

According to the definition of the HMM we have all the information we need to compute this joint distribution:

This is the main algorithm for performing inference on a Markov model. Remember that with a HMM we are interested in the real state of the system but unfortunately we cannot observe it. Instead we observe a variable \(x_k\) that depends from the state \(z_k\). The forward/backward algorithm gives us access to the hidden state given an observed sequence of events \(X\). It allows us to compute the probability of the state at step k given a sequence of events \(p(z_k|x1,…,x_n)\).

As its name says it contains 2 parts a forward part and a backward part:

We can write it as:

The first line is simply the Baye’s rule on conditional probabilities and the second line relies on the fact that \(x_{k+1},…,x_n\) depends only on \(z_k\).

The main idea with Markov model is to look for a recursion so that we can propagate the information in subsequent stages.

How did we get there?

We only have to solve the recursion. Let’s start with the initial case

The backward follows a similar idea where the trick is to introduce a recursion to express \(p(x_{k+1},…,x_n|z_k)\).

This gives us the recursion we were looking for

So the total complexity is \(\Theta(nm^2)\). This might not seem terrific in terms of complexity but if you compare it against the naive case which has a complexity of \(\Theta(m^n)\), it turns out to be pretty impressive.

Just let’s take a simple example where we make 100 observations of a system which has 10 different states. With the naive approach we have a complexity of \(\Theta(m^n) = \Theta(10^100)\) and that’s huge!

With the Forward/Backward algorithm the complexity is simply \(\Theta(100 \times 10^2) = \Theta(10^4)\) and that’s a huge improvement (of several orders of magnitude).

Why is it so efficient? The idea is because the recursion allows us to re-use the things we have already computed previously.

The Forward/Backward algorithm is great to infer the values of \(z_k\) given a set of observations \(x_1,…,x_n\). However it doesn’t allow to find the most probable sequence of \(z\).

And this exactly what the Viterbi algorithm does. 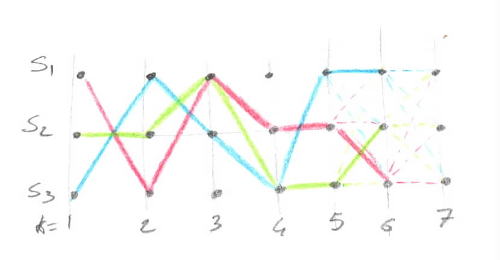 We still assume that the observed \(x\) and distributions are known. The goal of the algorithm is to find to most likely sequence of \(z\) – let’s call it \(z^*\). We can write it as

For that we rely on the following property:

and we can now write

If you look back at the diagram at the beginning of this section you should have a clear idea of how it works. It starts from step 1 and figure out the most likely state given \(x_1\). Then it moves on step 2 and computes the most probable sequence for \(z_1, z_2\) given \(x_1\) and \(x_2\), and so on. At each step we rely on the sequences we have computed on the previous step.

The HMM are generic enough and have a wide range of application in many domains. The probabilities computation could make it impressive at first but like the Markov Chain once you get a good intuition of how things work it turns out to be rather accessible.