In my opinion many of the problems come from a misunderstanding or misconception on how Futures work. (e.g. the strict nature of Futures and the way they interact with Execution Contexts to name a few).

That’s enough of an excuse to dive into the Scala Future and ExecutionContext implementation.

Lets take a basic example to support our investigation:

This is a very basic code. The main program execute 2 tasks. Each tasks does nothing but wait a few seconds to simulate some execution (e.g. fetching something from a database or over the network, writing to a file, …).

Unsuprisingly the output is the following:

In order to do it we need an asynchronous computation and in Scala this is typically done by using a Future. So let’s just wrap our tasks into a Future.

Basically a Future is just a placeholder for something that doesn’t exist yet. Here our 2 tasks return a Future[Unit], that is a placeholder that will contain Unit when the task completes. The placeholder (the Future) is returned straight away, before the task is actually executed.

Setting up an execution context

However if we try to run this program we get a compilation error:

As you can see we need an ExecutionContext in order to be able to use a Future. Don’t worry we’re going to see what is an ExcecutionContext in detail but for now let’s just use the global execution context as suggested by the compiler.

There are 3 ways to ways to use the global execution context:

and run our program again:

There is a bunch of things worth noting here!

I guess there is nothing surprising here for people accustomed to concurrent programming.

Let’s stop for a while and try to understand what happens behind the scene when we create a Future and why we need an ExecutionContext.

The implementation of Future 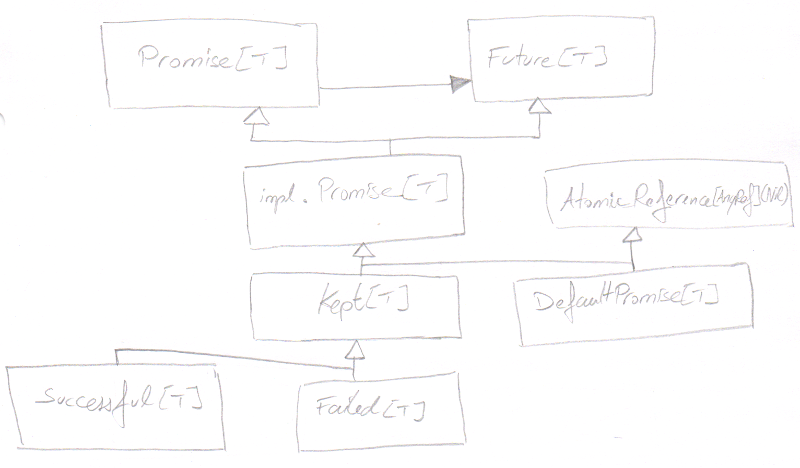 is actually calling the method apply on the Future companion object:

So it takes a by-name parameter body and an implicit ExecutionContext. Then it calls map on Future.unit.

It’s a Future of a successful Promise. But what is a Promise? Well it’s something that gives a Future, obviously! A Future is a placeholder for a result that can be read when available. A Promise is like a “writable-once” container that can be used to complete a Future with the written value (“writable-once” is the reason why DefaultPromise extends AtomicReference).

In our case it’s an already kept promised (because we already know the value to use to complete the promise).

All futures constructed from an already known value (Futures constructed from a Try including Future.successful(), Future.failed() and Future.fromTry()) are implemented as a Kept promise (i.e. an already completed promise). It means that there is no computation executed in theses cases. The available value is just wrapped in the corresponding Future implementation using the current thread.

If you find yourself in such a situation remember to use one of these 3 constructors as it avoids unnecessary thread context switches.

We’re almost there we need to look at KeptPromise.apply.

You can have a look at the Successful class but we have now a completed promise which holds the value ().

As the value to complete the Future was already known from the start there is no computation to execute so no need for an execution context so far.

Now going back to Future.apply the next operation to look at is map.

Remember we’re mapping over Future.unit and map is defined as

However transform is not implemented directly on the Future trait. In our case we are calling transform on Future.unit which is actually a Kept Promise and transform is implemented in its superclass scala.concurrent.impl.Promise.

Here we create a new Promise. However this time it’s not a Kept Promise but a DefaultPromise, a promise that is not already fulfilled. Then onComplete is called with a callback that completes p, the DefaultPromise, by applying the transformation f to the result of the current future.

Remember that we are calling transform on Future.unit which is a Kept promise and this is where onComplete is defined.

The key here is to note that executor.execute(this) actually invokes run() which in turns execute the onComplete callback.

As you can see ExecutionContext has an execute methods which takes a Runnable.

In fact it’s no coincidence that it’s very similar to a Java Executor:

By now it should be clear how the callbacks are now executed onto a different thread (depending on the ExecutionContext passed in). That’s why using Future { } to construct a Future from a value already available is an anti-pattern.

But before we jump onto the execution context details let’s keep focused on the implementation of Futures and Promises as they are still a few important things to cover.

DefaultPromises as a state machine 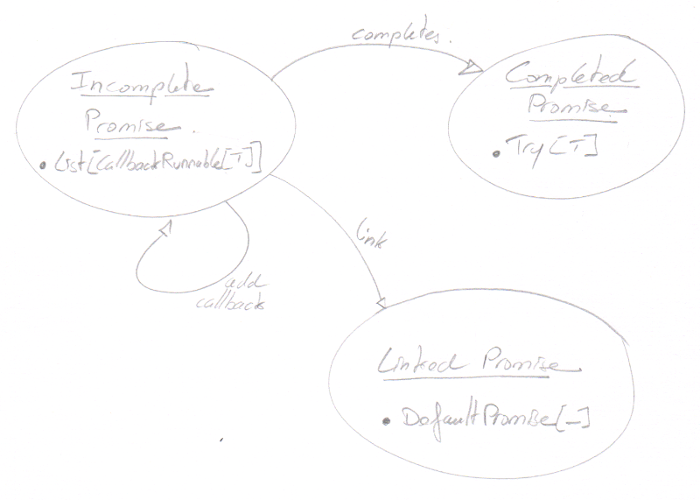 Extending AtomicReference is a clever trick because a Promise can be seen as a state-machine moving from the incomplete state to the complete (or fulfilled) state. Using an AtomicReference makes sure there is only one possible transition from incomplete to complete.

If the atomic reference is a Try we know the promise is fulfilled otherwise it is still incomplete. Moreover using an atomic reference allows to add more callbacks in a thread-safe and non-blocking way.

There is a third state worth noting. This is when the promise is link to another promise which is particularly useful in case of chained promises.

For instance we have seen how a call to transform creates a new Promise. By doing so we can end up with a chain of promises. This is not really a problem for transform because as soon as the root promise completes so does all of the promises down the chain.

However for flatMap (which is implemented using transformWith) things are more complicated. Like transform, transformWith creates a new Promise p. But this time the callback also returns a Future which might as well be a DefaultPromise. This new Promise can only complete when the promise p does. Therefore it’s safe to “link” this promise to p and add all of its callbacks to the callbacks of p. It’s like if the whole promise chain gets “collapsed” onto the root promise. This is a very useful thing to do as it may avoid some memory links (more details here) 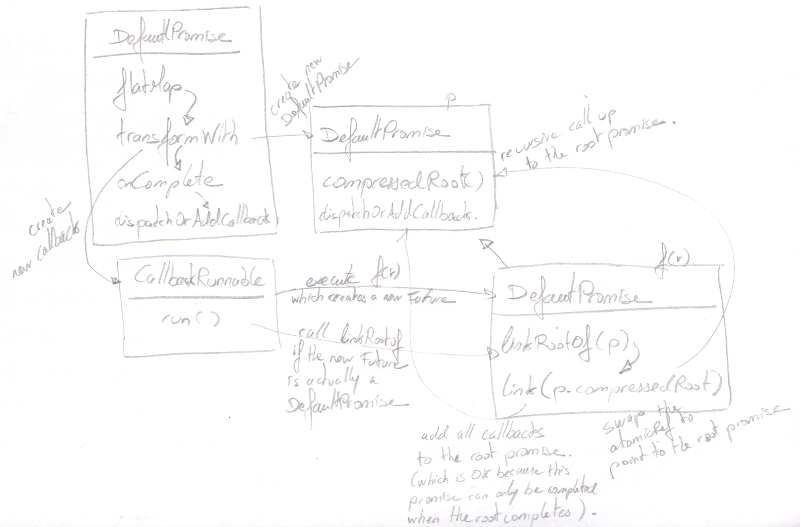 Similarly to the Java Executor the Scala ExecutionContext allows to separate the business logic (i.e. what the code does) from the execution logic (i.e. how the code is executed).

As the global execution context is the default one and the most easy one to setup let’s have a look at what it actually is.

Then it’s calling the fromExecutor constructor but doesn’t provide any executor:

If you look at the implementation of

you’ll notice that there is a bunch of properties used to configure the parallelism of the ForkJoinPool.

Let’s get back to out example to see how these parameters influence the program execution. But first let’s modify our program slightly so that it spawns more tasks:

So now we are starting a bunch of 20 tasks at once. When executed it produces the following output:

Looks OK, but why 8 threads are used and not 4 or 16, or anything else. Well the answer is in the code of the createDefaultExecutorService:

When the property scala.concurrent.context.maxThreads is not set it defaults to the number of available cores on the system. In my case it’s 8. It might be different on your machine. More importantly it means that it’s quite likely that the settings are going to be different between the developper environment and the production environment. Something worth to keep in mind in case of performance issues …

Now let’s see what happens if we change the parallelism settings. For instance let’s set this property to 1 in the build.sbt:

Now the tasks are executed one by one:

and it takes 40s to execute all of them.

All we have done is wrap our computation into a scala.concurrent.blocking call. Now if we run our program again it starts all the tasks at once and completes in only 2s.

That’s because the global execution context is “blocking” aware and starts extra threads for blocking computations.
This setting is controlled by the property scala.concurrent.context.maxExtraThreads which defaults to 256.

Finally as the global ExecutionContext is backed by a ForkJoinPool it makes it more suited for CPU-bound tasks.

This has been quite an involved journey (according to the length of this post) but by now it should be clear what are the implication of using Future and choosing an ExecutionContext.

As a summary here are the main pitfalls to avoid: