Continuing my tour of the Spark ecosystem today’s focus will be on Alluxio, a distributed storage system that integrates nicely with many compute engines – including Spark.

The official definition of Alluxio is (or at least that’s how one of its author presents it):

Let’s see what each of these terms actually means:

These all look like promising! But really what is it?

Well if you take a quick look at the big data world today things can be split into 2 categories:

And each compute engine should be able to access any of these file systems.

And this is exactly where Alluxio comes into place, right in the middle, between these 2 categories. 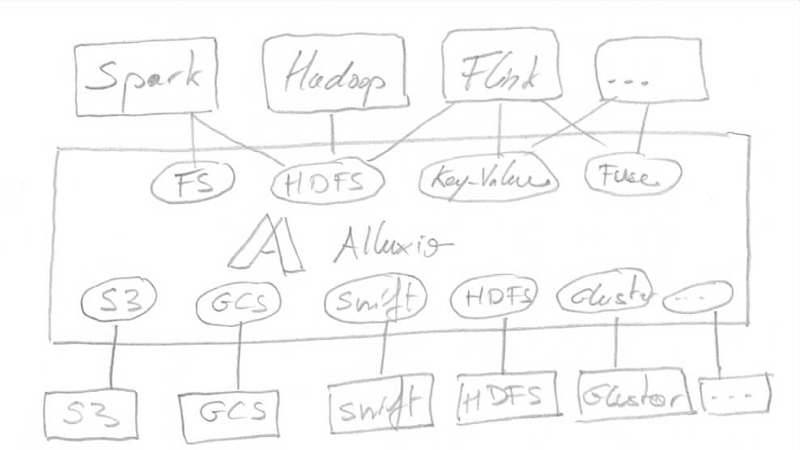 Alluxio architecture is follows a master/workers scheme. It requires a master node (which can be fault tolerant – using zookeeper?).

The master node is in charge of maintaining the unified namespace (i.e. the file system tree) and keeping track of the available workers.

The workers manage local resources (RAM, SSD, disk), stores chunk of data and fetch data from the underlying physical storage. They also respond to client request and report heartbeat to the master node.

With this architecture it’s easy to increase the storage capacity by adding more workers to the system.

This architecture can be also located in the same cluster as the application (e.g. Spark) so that you benefit from data locality.

The integration is pretty simple as Alluxio provides different interfaces to integrate with including HDFS, key/value and file system interfaces. It means that as soon as your framework can “talk” to one of these interfaces it can integrate with Alluxio.

E.g if your framework works only on top of HDFS it can integrate with Alluxio and support S3, GlusterFS, GCS (Google Cloud Storage), …. for free.

As Alluxio sits between the application and the physical storage it can save the data into its own memory as it fetches it from the real storages.

As a result you gain speed: it ‘s much faster to read data from Alluxio’s memory than from S3 going over the internet.

Alluxio provides some additional tiered storage for SSD and disks in addition to memory. 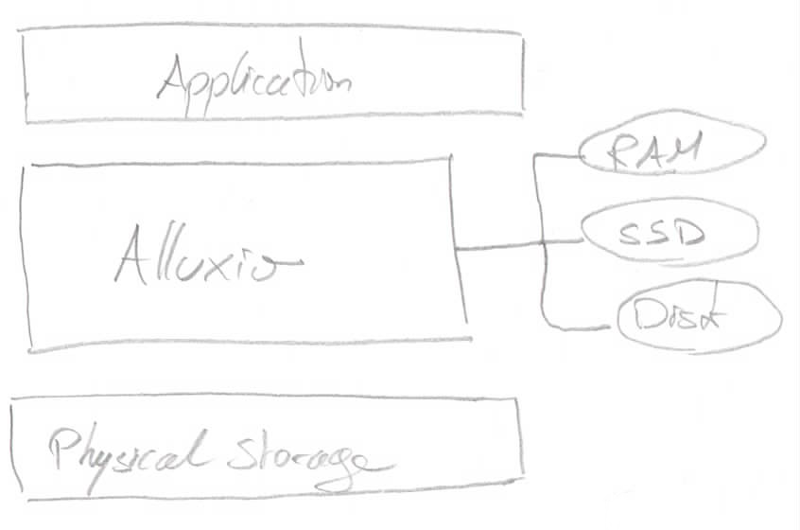 The data stored into the tiered storage is manage by Alluxio and is not directly accessible. (in a similar way that HDFS as not directly readable – data is chunked into many files with some additional metadata).

Usage shows that it’s common to gain an order of magnitude in terms of speed when running computation using Alluxio.

The unified naming really works in the same way as we mount disks and hosts into a file system.

It’s the master job to maintain this unified naming.

This feature is disabled by default but seemed quite interesting to me. The idea – taken from Spark (I suppose) – is to keep track of which jobs produce which data.

So that if some data is no longer accessible Alluxio can re-trigger the jobs that generated the data.

This allows huge saving in terms of space. You don’t need to duplicate all the data several times over the cluster. You can only store it once and recompute it in the seldom case of failure.

I am not sure how useful it is in practice but the idea sounds interesting and worth to explore.

Alluxio brings some key benefits to the table by decoupling the physical storage from the application layer.
The choice to use the memory as primary storage makes lot of sense as the RAM   throughput increases exponentially (and cost decreases exponentially as well, -50% every 18 months).
The disk throughput increases more slowly.
More and more application uses memory. MapReduce has moved from disk io (with Hadoop) to memory io (with Spark).
Memory compute engines (e.g. Spark) have increased the performance significantly but the problem isn’t solved yet because it lacks a storage layer.